CITYCIDE: ELIA'S OFF HER ROCKER WITH LATEST TAX IDEA

That didn't take long, did it?

After just 48 hours of basking in the credit for a casino deal that she had absolutely nothing to do with, and 18 months of crowing about cooperation and hand-holding, Mayor Irene Elia proved late Friday afternoon that she can be just as greedily short-sighted as any of her predecessors. Elia's proposed 1-percent "development tax," floated at a meeting of city business leaders, stunned even Herroner's harshest critics in city government. Outgoing City Council member Barbara Ann Geracitano, who could find something to rip on if Elia came up with a foolproof plan to eliminate crime and poverty in the city, didn't believe the mayor could produce an idea this dumb.

"No, I haven't heard anything about that," Geracitano said, a touch of horror in her eyes, when asked if she had heard about the plan, then still just an improbable rumor, two hours before Elia unveiled her plan. "A development tax?"

Yes, a development tax. Under Elia's proposal, anyone wanting to build anything in Niagara Falls would have to give City Hall an extra 1 percent.

Now, extortion has a long, rich tradition in this city. But previous shakedowns took place in private. Elia wants to make them law.

So, if you want to build, say, a $250 million hotel-entertainment complex, you'd have to shell out an extra $2.5 million. I'm sure the developers will be thrilled.

Normally, when you hear the phrase "development tax," it has the word "incentive" or "credit" immediately following it. This might be the most novel idea Elia has come up with since entering the political world.

You might think the mayor had the idea after realizing that the city's direct cut from the proposed Seneca-run casino might be less than $1 million per year. But no. The rumor bounced around for at least two weeks before Gov. George Pataki's announcement at Prospect Point.

It's hard to imagine why Elia would do, or even conceive of, anything to discourage businesses from coming to a city that's been begging for such an influx for decades. Not that she's the only one worried about maximizing the city's direct benefit from a casino. The first reaction of veteran city councilmen Tony Quaranto and John Accardo and always-visionary former mayor Jake Palillo--what's our cut?

It works this way, I think--though I don't hold a Ph.D.: Developers build the casino and surrounding businesses, like hotels, restaurants and attractions. Those entities pay property taxes. If the job is done right, those property taxes quickly, and vastly, outweigh any direct payoff from the casino.

But then you look at where the money would go, and realize how such a truly bad idea is born.

The revenues from the development tax would be earmarked for Elia's pet projects, like the Community Faire, Save Our Souls, er, School, and the sad annual exercise in futility known as A Festival of Lights.

"I think we need funds for those sorts of things, but it's the wrong way of going about it," said City Schools Superintendent and Festival of Lights Chairman Carmen Granto. "I don't know what the message is--she proposes a 27 percent tax increase, then fights a community library because she says it would raise taxes, and now she's trying to do this to potential developers that we haven't even gotten yet.

"We ought to have those quality-of-life things, but you have to have a life first. Now that we have a glimmer of hope," he added. "But to whack new businesses with 1 percent doesn't make any sense. You can negotiate those sorts of things when you make deals with developers, but to lay it on them as a strict part of the law is tough."

This is precisely why Pataki kept Elia in the dark about negotiations with the Senecas. And why the "advisory panel" of local politicos and bureaucrats formed two weeks earlier will, and should be, largely ignored when renovation money from the Feds starts coming in.

Pataki, as well as Sens. Charles Schumer and Hillary Clinton, have made plenty of campaign trips to Niagara Falls over the past few years. They've seen what happens when local elected leaders get a say in how state and federal money is spent. With Western New York now a key battleground in statewide elections, they're simply not going to allow it to happen any longer. 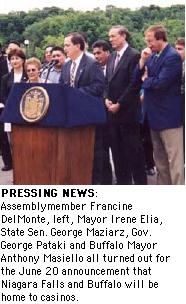 When her turn at the podium finally came, Elia delivered a performance that was nothing new to the locals, but clearly surprised the Governor.

After opening with a line from a Catholic Mass--apparently God likes to play the slots--Elia tried to somehow connect the casino compact to the previous day's vote on the library.

"Two to one!" Elia shouted.

There must have been a few people listening who had any idea what she was talking about. But Pataki clearly wasn't one of them. He looked quizzically at the mayor.

You can't really blame Herroner, though. She didn't have much time to prepare her remarks, since she found out that the deal was done at about the same time as the media--roughly two hours before the announcement.

A savvier politician would take complete exclusion from such vital negotiations as a sign that whatever power City Hall ever had outside the borders of Niagara Falls is long gone. And that after staking his political future on gaming in Western New York, Pataki now is calling the shots within the city limits, too.

Elia should have realized that when her brief opposition to the proposed Cintra lease at Niagara Falls International Airport was stomped out by a call from Albany. Another call from the Capitol this week should quash this inane development tax.

In fact, you can bet on it.

It seemed like a good idea at the time.

But looking back, it's hard to understand why.

Niagara Splash Park, the remnants of which occupy the spot proposed for a permanent Seneca-run casino, opened on May 29, 1988. Paid attendance on Opening Day was 2,173, a total considered disappointing at the time.

It turned out to be a high point. Totally dependent on good weather, the $12 million attraction suffered through cold temperatures, erratic attendance and finally, the ultimate indignity--a City Hall takeover.

Walking around the abandoned ground today, it seems obvious why it didn't work.

The park contains several water slides of varying heights, two splash pools, a tube ride, a concession stand, a locker room and, this being Niagara Falls, a whole lot of cement.

Given the lack of non-water activities, the admission price of $11.95 in 1988 dollars was exorbitant. Then there were extra fees for parking, lockers, tube rentals and other incidentals.

An hour away, Darien Lake was charging a comparable price for bigger water slides, as well as one of the world's largest roller coasters, a variety of other rides, a miniature golf course, a go-kart track, live entertainment and an array of concessions. In other words, there was plenty to do when it was too cold to go in the water.

The pure water park concept didn't sell on the Canadian side, either, despite a bigger facility in a prime location on Lundy's Lane near the Queen Elizabeth Way.

The eastern bookend for a series of alleged revitalization along Niagara Street, Niagara Splash Park eventually became one more cause of the cynicism that pervades this side of the border. The unpainted wood steps leading up to bone-dry water slides serve as a visual reminder of how hard it is to do anything right in the city.

But the park did serve one positive function--it clogged up a piece of prime real estate for more than a decade, a site that's now the planned destination of a long-awaited casino.

And it won't take long to knock down.

I generally despise shameless self-promotion by media outlets, whether it consists of television news slogans hooked to the word "hometown" or blatant advertising vehicles masquerading as "best-of" surveys.

But I've got a little more space to fill, so what the hey.

A year ago, when the Niagara Falls Reporter was born, I was working at The Daily Pennysaver in town.

While serving my time, I got to hear these sage words from that publication's alleged editor: "It's one thing to sit around on a bar stool and talk about running a newspaper. It's another thing to actually do it."

Thanks to Mike Hudson and Bruce Battaglia, not only for providing an outlet for my ramblings since I became a beneficiary of corporate downsizing, but for supplying readers with insight on their community that the dailies and television stations can't, or won't, provide.

The last few months have reminded me why I got into this business in the first place, and how satisfying (and fun) it can, and should, be.

The next year should be a momentous one in the history of Niagara Falls and all of Western New York, and I have no doubt the Reporter will grow and improve along with the community it serves.

Maybe we'll even start our own "best-of" promotion.