FALLS IN LEAGUE OF ITS OWN; CHANCES OF COMEBACK SLIM

Niagara Falls is a great baseball town. But for most of its modern history, it hasn't had a team of its own.

Industrial leagues that included teams from both sides of the border provided thousands of nights of entertainment, fierce corporate rivalries and cushy jobs for top players through the first half of the 20th century.

Those leagues also produced Sal Maglie, who became one of the major leagues' most colorful figures and whose high-and-tight pitching style earned possibly the best nickname in the bigs--"The Barber." 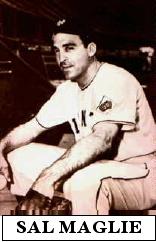 But tradition and legions of hardcore fans, particularly of the New York Yankees, haven't translated into steady attendance for periodic revivals of professional baseball. Four professional teams--the Pirates, White Sox and Rapids of the Class A New York-Penn League and the short-lived Mallards of the gum-and-string independent North Atlantic League--have come and gone just since 1970.

A disintegrating economy and stadium created erratic support for all four teams. Since the Mallards became extinct after their single season in 1995, Sal Maglie Stadium has been rebuilt to mixed reviews. The would-be fan base continues to get older and poorer.

But another team seems headed for Maglie, assuming the field is ready by the summer of 2002. A group led by Niagara County Legislator Sam Granieri has been granted a franchise in the Northeast Collegiate Baseball League and is working on a lease deal with City Hall.

Given the city's history with the sport, guarded optimism probably is the prudent approach.

Like so many other Niagara Falls businesses, baseball has been a victim of bad timing, bad politics and plain old bad luck.

The city had a charter franchise in the PONY League, later known as the New York-Penn League, in 1939. It moved to Jamestown a year later, a path another Falls franchise would follow more than a half-century later.

With racial tensions hurting attendance at Buffalo's War Memorial Stadium, the Bisons made Hyde Park home for parts of three seasons from 1967 to 1969. But just as the team was expected to announce an agreement with Niagara Falls for the 1970 season, officials decided to play in Lackawanna instead. The Bisons lasted one year there, then went into hibernation until Bob Rich revived the franchise in 1979.

The NY-P League returned to Niagara Falls in the form of the Pirates in 1971, with Maglie as the general manager. The community-owned team lasted longer than any other professional franchise in the city's history, but lost its major-league affiliation in 1979. After one season as an independent operation, the Pirates surrendered.

Downtown businessman George Wenz bought Welland's NY-P franchise in 1982 and the White Sox won the pennant in their first season, but rising insurance costs and the growing value of franchises led him to accept a buyout offer from the Toronto Blue Jays in 1985.

As part of the bid for a major league franchise in Buffalo, Rich brought another NY-P team to the Falls in 1989. The Rapids utilized the sort of unique promotions that made the Bisons a model franchise, but the lousy sightlines at Sal Maglie Stadium and turgid local economy limited their success.

The Rapids won the NY-P title in 1993. Within a month, Rich shifted the franchise to Jamestown. Attendance was less an issue than the stadium itself. The working agreement with the major leagues required all facilities to meet minimum standards. Beyond having four bases and a backstop, Sal Maglie Stadium met none of them. To keep the Rapids in the Falls, the city had to find $1.8 million for the necessary repairs.

Nearly every other city in New York with a stadium got state cash for extensive renovations, but Niagara Falls somehow wound up without a new facility or a team. Then-Mayor Jake Palillo, a Republican, maintained that the city was offered a matching grant and couldn't afford its end of it. Then-State Assemblyman Joseph Pillitere, a Democrat, said he had procured a straight grant that wouldn't have cost the team a dime.

Whatever the case, the city missed out on the money. And other than the Pete Marra-owned Mallards' single season in a rag-tag league that has since folded, it hasn't had a professional team since.

Benny, the Barber, the Banjo Hitter

While Maglie easily was the best and most well-known Niagara Falls native to reach the big time, he wasn't the first or last.

Benny Bengough started his professional career with the original Buffalo Bisons of the International League in 1918 and jumped to the big leagues with the New York Yankees in 1922. While Bengough was a member of the Yankees' famed "Murderers' Row" teams of the late 1920s and early '30s, he definitely was an innocent.

A backup catcher, Bengough hit .255 in parts of 10 seasons. But while teammates Babe Ruth and Lou Gehrig were making home runs a common part of what had been a low-scoring, strategic game, Benny didn't knock a single ball out of the park in 1,125 career at-bats. Considered a steady defensive catcher, the most notable statistic of Bengough's career was his 1927 salary of $8,000--$500 more than Gehrig made during a season in which he hit 47 home runs.

Bengough's greatest contribution to the sport came after his playing days ended with the St. Louis Browns in 1932. As a coach with the Philadelphia Phillies more than a decade later, Bengough told a hard-throwing, but wild, young right-hander named Robin Roberts to develop a routine to help him slow down and focus between pitches. Using his trademark series of tugs, hitches and wipes, Roberts went on to win 286 games and a spot in the Hall of Fame.

Roberts and Maglie, along with Brooklyn's Don Newcombe, were the National League's dominant pitchers in the early 1950s. Newcombe had to wait for the color line to fade before making his debut, while Maglie took an even more circuitous route to stardom.

Maglie had a brief stint in the minors in 1941, but after the United States entered World War II that December, he took a defense-related job in Welland and the military exemption that went along with it. While Maglie worked, and played baseball in the industrial leagues for a Canadian company, hundreds of stars and prospects served and fought.

Maglie got a shot with the New York Giants in 1945, but had conversations with Mexican League owner Jorge Pasquel about jumping south of the border. In an era when players essentially were indentured servants of the owners, this was tantamount to treason. Maglie and a handful of other major leaguers were banned "for life" by Commissioner Happy Chandler, leaving him no choice but to sign with Pasquel. After four seasons pitching in Mexico and off seasons tending to a Pine Avenue gas station, Maglie was reinstated in 1949.

Maglie later would say he learned to pitch while in Mexico, working on his curve ball and trademark intimidation with Adolphe Luque. But upon returning to the Giants in 1950, Maglie pitched like he had struck a deal with Old Scratch.

The Indians sent him to the Brooklyn Dodgers a year later, where he went 13-5 in the midst of a tight pennant race, including a key no-hitter late in September. Maglie wound up his career bouncing to the Yankees in 1957, making him the most notable man to play for all three New York franchises, and to the Cardinals in 1958.

While Maglie always considered himself a Giant, and was known to dislike the picture on the cover of this issue because it pictures him in a Yankees uniform, his last significant accomplishment as a player came in pinstripes. At age 41, the notoriously poor hitter slugged just the second home run of his major-league career.

Maglie's career wasn't particularly long--eight full seasons and parts of two others--but he played a supporting role in three of the most memorable games in the sport's long history.

He started the Giants' 1951 playoff game against Brooklyn on the Polo Grounds after the Dodgers surged to a 4-1 lead, but Bobby Thomson's "Shot Heard 'Round the World" took The Barber off the hook and put New York in the World Series.

In 1954, he started Game 1 of the World Series against heavily favored Cleveland. But he held the Indians--who had won an American League-record 111 games that year--in check and left in the eighth inning and the score tied at two. The next batter, Indians first baseman Vic Wertz, blasted a mammoth shot to the deepest part of center field off reliever Don Liddle, setting up Willie Mays' much-replayed catch and throw to keep the game tied. Two innings later, little-known Dusty Rhodes' pinch-hit three-run home run sparked New York to a stunning sweep of Cleveland.

And in his last year as a full-time starter, Maglie was the winning pitcher for Brooklyn in the Series opener against the Yankees, beating Whitey Ford. Maglie took the mound in Game 5 with a chance to put the Dodgers ahead 3-2. He gave up just five hits and two runs, but his sharp performance came on the same day that Don Larsen pitched the only perfect game in Series history.

Maglie finished with a 119-62 record, good for a .658 winning percentage that ranks him 16th in major league history--one spot ahead of Sandy Koufax.

Like Bengough, Maglie went on to become a coach. His last season in the bigs was immortalized in the groundbreaking book, Ball Four by former Yankees pitcher Jim Bouton. Maglie and Bouton spent the 1969 season with the expansion Seattle Pilots. The Barber's coaching advice became part of the behind-the-scenes flavor that made the book a best-seller. "Son, just put three fastballs low and hard on the outside corner," Maglie would tell a young Pilots pitcher trying to hold a lead. "And we'll both go in and pound the Bud."

Unfortunately for Maglie and the Pilots, few of his charges possessed his fastball or control. After a dismal year on the field and at the gate, Seattle's franchise went bankrupt and shifted to Milwaukee for the 1970 season, where it was rechristened as the Brewers.

A year later, Maglie was back at the stadium that would eventually bear his name, serving as general manager for the city's latest NY-P entry.

While Maglie ran the Niagara Falls Pirates through the 1970s, another native of the city was moving up baseball's ranks. Rick Manning broke into Cleveland's lineup in 1975 at age 20 and went on to have the longest career of any Falls player, lasting 13 seasons with the Indians and Milwaukee.

Manning played in 1,555 major league games and earned a Gold Glove for his play in center field after the 1976 season. But by spring 1978, Indians officials realized they had to trade either Manning or their equally young and promising ace pitcher, Dennis Eckersley. Why? Because the soon-to-be-former Mrs. Eckersley had moved in with Manning.

Indians President Gabe Paul swapped Eckersley to Boston, where immediately he won 20 games. While Manning's bat didn't catch up to his brilliant glove (he never hit more than eight homers in a season and didn't get on base enough to fully utilize his speed as a lead-off hitter), Eckersley went on to pitch for 21 more seasons. Nearly unhittable as the closer of the great Oakland teams of the late 1980s and early '90s, Eckersley retired with the career record for appearances and as the only pitcher in history to record more than 100 complete games and more than 200 saves.

Manning still serves as the scapegoat in the minds of many Cleveland fans for Paul's disassembling of a solid young team.

"We gave away one of the greatest pitchers ever and we kept a (expletive deleted) banjo hitter," muttered one local Indians devotee.

"We traded the wrong guy," he said.