It's been more than 30 years, but Dean Wright's memories of what he thought would be his last moments on earth couldn't be more vivid.

"The gas dropped and the shooting started -- I was scared to death," said Wright, one of the prison employees taken hostage during the September, 1971 riot at Attica State Correctional Facility. "I said the Lord's Prayer and said, 'I hope the Lord gives me the strength to die like a man.'" 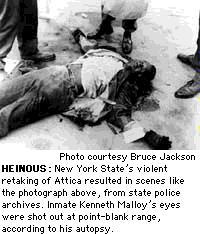 Like the rest of the hostages used as protection and political chips by the leaders of the prisoner insurrection, Wright had spent most of the previous four days bound and blindfolded, soaked with rain, mud and human filth. A lingering cold that turned to acute pneumonia during the siege made him vomit on the rare occasions he was given a cheese sandwich.

On the cold, gray morning of Sept. 13, Wright and the rest of the hostages became human shields after the inmates refused an ultimatum demanding their surrender. Helicopters repeatedly flew over D Yard, turning an already tense situation into chaos.

"There were two inmates behind me, one had what I thought was a knife to my throat," Wright said during a state hearing last week at the Rochester Institute of Technology for hostages and their families. "They had us in a circle, blindfolded, with our hands and feet tied. One inmate came along and started hitting me in the belly with some kind of club until some others stopped him."

Moments later, at 9:46 a.m., the retaking of the prison began with helicopters bombing the yard with tear gas. Almost immediately, the state's assault team opened fire.

"I heard a bullet go by and hit one of the men behind me," Wright said. "It sounded like you took a pumpkin and smashed it on a blacktop road. When he went down, I went down with him.

"All you could hear was shooting and screaming. The first thing I saw when they turned me over, about six inches from my face, was the barrel of a 12-gauge shotgun. Then somebody yelled, 'He's one of ours! He's one of ours!' and he left." 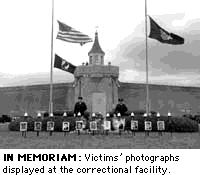 John Stockholm was a 24-year-old father of two when he was chosen as one of the eight hostages to be taken up on the catwalks overlooking D Yard and held with a knife to his throat in an effort to ward off the state's attack.

"They wanted to know if I wanted to have a cigarette, because I was going to die 'like the rest of you pigs,'" Stockholm said during Thursday's hearing. "I took the cigarette."

Still blindfolded, Stockholm felt his appointed "executioner" fall off his back after the shooting began. He also hit the deck, and stayed there until the shooting stopped.

"You could hear the sounds and the smell of pain and death," Stockholm said. "They've haunted me for more than 30 years. I hear them and smell them in my nightmares."

Ten other hostages died from gunshot wounds that morning, along with 29 inmates. Though state officials initially said the hostages had died after having their throats slit by their captors during the assault, autopsies quickly proved that to be a lie.

That was just one of the state's deceptions in the days, months and years following the riot at Attica. Survivors were told to take six months off and continued to receive paychecks identical to their regular pay. Officials urged widows to accept "benefits" as meager as $230 per month for a woman with five children -- the same as if her husband had died a natural death, rather than being shot to death by his employer.

What none of the survivors or families knew was that by cashing the checks, they were forfeiting their right to sue the state, which had filed workmen's compensation claims on their behalf, without their knowledge. Only Lynda Jones, the widow of slain prison clerk Herb Jones, refused the state's offer and retained the right to sue. She won $1 million more than a decade later.

Simmering frustrations among the survivors and families of the hostages finally peaked in January, 2000, when New York paid $8 million to prisoners wounded during the retaking and tortured in the aftermath, and another $4 million to their attorneys, ending more than a quarter-century of litigation.

Forgotten Victims of Attica formed soon after. Group members said they're not resentful of the inmates, but of the state's refusal to admit that its actions proved catastrophic to its employees and their families. They formulated a "Five-Point Plan for Justice":

Wright pointed to the $125,000 awarded to prisoner Frank "Big Black" Smith, who testified that he was severely beaten and threatened with castration during the riot's aftermath.

"Anyone who was a hostage for one day or one hour deserves at least what Frank Smith got," Wright said, referring to the 12 prison employees, including Quinn, whose injuries were severe enough that the prisoners released them on the riot's first day.

Last year, the state legislature passed a bill sponsored by State Sen. Dale Volker (R-Depew) that would have given $50,000 each to the families of the 11 employees killed at Attica. The group refused the offer, due to both the amount and the state's refusal to admit any wrongdoing or compensate the survivors and their families.

Volker is a member of the Attica Task Force, the body appointed by Gov. George Pataki to conduct last week's hearings. Other members include Glenn Goord, Commissioner of the State Department of Correctional Services; Assemblyman Arthur Eve (D-Buffalo), who was one of the negotiators during the riot; and Assemblyman Jeffrion L. Aubry (D-Queens), chairman of the Assembly's Correction Committee.

Goord said no timetable has been set for the panel to provide its recommendations to Pataki, and that last week's hearings were the start of the process.

Besides hearing from surviving hostages, the panel listened as family members described the riot's impact on their husbands and fathers.

"Richard survived the hostage situation physically, but not emotionally," Julie Fargo said of her husband, a World War II veteran who had worked at the prison for 23 years before the riot.

Richard Fargo suffered a heart attack during the six months off given to hostages and never returned to work at the prison. His wife, a kindergarten teacher at Attica Central School, said he worked a series of odd jobs until his health declined.

She said he was never quite the same man who went to work on Sept. 9, 1971. He was beaten with a shovel at the start of the uprising and "never quite believed the X-rays, that the doctor said showed no fractured skull," Mrs. Fargo said. "And he had lingering coughing from the tear gas."

She described her husband, before the riot, as an affable man who became a prison guard because "he wanted to make a difference in the lives of the inmates. He thought he could show them, by example, how to turn their lives around."

Fargo, who spent his days in captivity with shards of broken glass in his eyes under a blindfold, held the bandaged, fractured skull of a friend and co-worker on the ambulance ride to the hospital after the retaking.

Mrs. Fargo said her husband, once a sociable type, became short-tempered and withdrew from the outside world.

"He tried to put the ordeal behind him and drank too much to do that," Mrs. Fargo said. "Our family lost a happy, loving husband and father."

"He never got over that his employer could hurt him and his co-workers, as well as their families and widows, so badly," Mrs. Fargo said.

READ OTHER STORIES ON THIS TOPIC David Staba is the sports editor of the Niagara Falls Reporter and covered last week's hearing in Rochester for The New York Times. He welcomes email at dstaba13@aol.com.